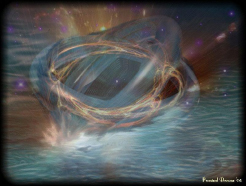 In the ancient temples of old chosen woman were taught the art of creating a Portal of Creation through the use of their Sexual Light vibration. They were sent to kings and pharaohs alike to teach the art of honoring the Goddess. They infused the Royalty with their high vibration of Sexual Light, lifting them to a place they could rule the country with honor. This Sacred order of women held tightly to their Sacred Sexuality and used it only as a tool of Creation for it was their greatest treasure. When they did interact with men in places of power they used themselves as a tuning fork, downloading the galactic stellar vibrations as instructed by Spirit holding the frequency until it was time to interact on a physical level.

Modern women have forgotten that they are the teachers of this inherent lost art. They need to stop waiting for men to make sex sacred. Each woman has a dormant encoding that is designed to be activated when in the presence of a male that is destined to be a catalyst. The female does not have to physically interact with the male to receive this encoding. The physical body remembers the previous interaction from times past and makes the appropriate adjustments to the DNA packet that has been energetically opened. Then the exchange contract is fulfilled on whatever level the female is comfortable with. (Astral, telepathic, physical, mental, or vibrational level) When the female aligns with the male vibration a chemical response is triggered via the glands within the chakra system and the Mystical Alchemical Marriage is announced and a new integrated Sacred Light is birthed and added to the earth grid.

This is a very empowering workshop for all women, whether young or old, married or single, divorced or still looking for the frog prince.

In this “WOMAN’S ONLY WORKSHOP” your sleeping sex goddess within will be awakened through a series of meditations, breathing techniques, & visualizations designed to activate and realign you with your Sacred Sexual Potential.

To register for this workshop and get directions contact